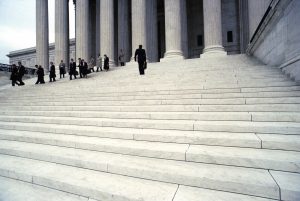 For the second time in as many weeks, a contentious bill up for vote in Missouri is stalled. The bill would require that Missouri voters show a photo ID before they cast ballots. Opponents of the bill argue that requiring a photo identification will lead to trouble and confusion for an estimated 220,000 Missouri registered voters who lack a photo ID.

State Sen. Jamilah Nasheed, D-St. Louis, cast the voter ID debate as a civil rights issue, saying that the law would “disenfranchise African Americans and minorities.” She has also said it would make it harder for students, older people, and poor people to cast ballots. “What is this really about?” Nasheed asked state Sen. Shalonn “Kiki” Curls, D-Kansas City. “It’s about suppression and it’s about rolling back the Voting Rights Act of 1965,” Curls responded. “And whether the members of this chamber feel as if that’s their personal intent, that’s the intent of this national movement.” In support of their concerns, opponents of the bill (Democrats) point to studies that suggest such laws tilt control of government toward Republicans by lowering turnout among Democratic-leaning voters. More importantly, opponents point to the fact that in-person voter impersonation fraud, meaning situation where someone lies about who he/she is at the polls, is all but unheard of and is, therefore, not a problem that requires a solution.

Proponents of the bill (Republicans) assert that their goal is to ensure the integrity of elections. They say that exemptions carved out for those born before 1946, those with disabilities, those with religious objections to having their photo taken, and those who can’t pay for an ID mean the law isn’t meant to disenfranchise anyone.

The bill, House Bill 1631, would only go into effect if a constitutional change is approved by voters. To put the change before voters, the Senate will also need to pass House Joint Resolution 53. The GOP Senate majority has yet to bring up that resolution.

The Impact on Seniors

Many opponents of the proposed legislation are concerned that the law will discourage seniors from voting because of the additional identification requirement. In general, additional “hoops” that a senior must jump through to accomplish anything can be a bar to success. Seniors who are homebound, for example, and have lost their identification cannot easily go out and replace it. Seniors who are suffering from memory loss may not remember where their identification is, or even remember the need to bring it with them. In short, the argument made by those opposed to the legislation is centered on the simple fact that the law will make it harder for seniors to vote and, consequently, less likely to vote.

Interestingly, seniors themselves do not appear to be as vocally opposed to the legislation as those who claim to be speaking for them. As is often the case, the debate regarding the proposed law effectively boils down to Republicans versus Democrats. Whether or not the additional identification requirement would truly result in fewer seniors voting remains to be seen. There is no doubt, however, that seniors can, and do, have a significant impact on elections in the United States. Currently, the older population in the U.S. makes up about 20 percent of the total population — and that percentage is expected to continue to grow over the next several decades. It should come as no surprise, therefore, that anything that could affect the ability of seniors to cast their ballots will be an issue, for both sides of  the proverbial political aisle.

If you have additional questions or concerns about senior issues contact an experienced Missouri elder law attorney at Amen, Gantner & Capriano, Your Estate Matters, LLC by calling (314) 966-8077 to schedule an appointment.